A Rapid Chess League for the Greater Vancouver Area in 2023

Play in 12 tournaments spread across all four seasons, and fight to be invited to our championship tournament at the end of the year! Who will be the winter, spring, summer, fall, and overall 2023 champion?

Session 1 on January 8
Irving K Barber Learning Centre 261 at UBC 1961 E Mall, Vancouver, BC
Session 2 on Feburary 12
Banquet Hall at Thompson Community Centre 5151 Granville Ave, Richmond, BC
Session 3 on March 5
Ponderosa Ballroom at UBC 6445 University Blvd, Vancouver, BC
All sessions are 6 rounds of CFC rated 15+10 from 10am to 5pm

How Our Rapid League Works

The league will consist of 12 CFC rated rapid tournaments followed by the championship in December. The 12 winners of each tournament and players with the most points at the end of each season will be invited to the 16 person championship.

You get points based on how well you do at a tournament:

6 points for placing 2nd at a tournament

3 points for placing 3rd at a tournament

The winner of each season will get a special trophy, but only players in the Open section are eligible to be invited to the championship.

A total of 16 invited players from the Open section will compete in a single elimination bracket of rapid chess over two days in December to determine the 2023 Vancity Rapid champion! Each match between two players will consist of two 15+10 games, with each player playing both colours. Ties will be broken by a single Armageddon Blitz game.

As a reminder, we will invite:

Winner of each tournament in the main league

Whoever has the most points at the end of each season

This means you can get invited by doing well across all 3 sessions in a season instead of wining a tournament!

Who will be the FIRST player to immortalize their name on the Vancity Knight? 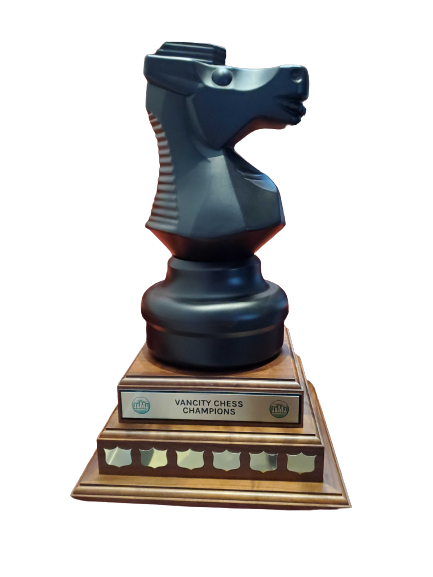 Everyone is welcome to play in our rapid chess league! What are you waiting for?
Register Now

If a season or tournament winner is already invited to the championship, we will invite the next highest placing player in the season who isn't already invited. Keep fighting for this reason because you may still get an invite if you don't place 1st!

What happens if a player moves up from U1400 to Open mid-season?

Players can technically have a score in both sections if they do this, but prizes and invites will still be awarded normally. Points earned while playing in the U1400 league will only apply to that league.

What's the point of the league for U1400 players?

We will still award a special trophy to the winner of each season! Also, we plan to introduce additional awards such as "most improved player" for each season. Finally, the points system is a fun extra layer of competition between players.

Do I have to play in every tournament of a season?

You can play in as many tournaments as you like to score points.

If I'm not interested in the league, can I still play in the tournaments?

Of course! Anyone is welcome to play in our tournaments. There's nothing special you need to do to be able to play besides registering normally.

How does Armageddon work for tiebreaks?

Both players will secretly put in a bid for the minimum amount of time from 60 seconds to 7 minutes that they want to play with as black. Whoever bids lower will play black. Whoever plays white must win (draw is a win for black).